A Great Family to Be a Part Of

It’s hard to believe you could get into fostering children by accident, but that’s exactly what happened to Corey and Haylee Hoffman. Corey, Haylee, and their two sons were like any other family until one day when a co-worker of Haylee’s mentioned that her daughter had been removed from her care for medical neglect and needed a place to stay for the weekend. Haylee and Corey said they’d be happy to have her but quickly realized that it was going to be more than a weekend. She ended up permanently placed with the Hoffman family right before her 17th birthday and this sparked Corey and Haylee’s desire to get licensed for adoption. 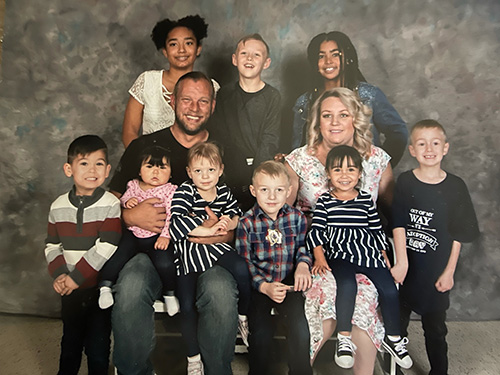 After their first experience with foster care, it became clear to the Hoffman’s that they were meant to help more kids. They decided to open their home and spent 7 years fostering children. They knew they wanted to help children who were older because of how challenging it is to find placements for teens. This meant understanding that the kids they were getting had been through a lot by the time they came to live with them. As Corey puts it, “Growing up, my family wasn’t the best. I want to show kids that no matter what their childhood was like, they get to determine the path they take. They need to decide who they are.”

Once the Hoffman’s decided they were ready to adopt, they did so in a big way. They met a group of four siblings and quickly realized that they were ready to adopt two of them. Paxton and Anistyn came to live with the Hoffman’s first, while the older two were placed elsewhere. Then, the children’s biological mom had another baby, Emory. The Hoffman’s were ready to take the baby in with open arms. After having three of the siblings together in their home, they soon realized how important it was for them to have all of them. The three younger children they had in their home had a special bond with their older siblings and the Hoffman’s didn’t want to break that. “We didn’t know if the older kids would be a good fit, but as we started doing visits, they fit in with the family right away,” says Haylee. The Hoffman’s could see that keeping the siblings together made them feel more loved and accepted because they had their family members with them. Now, they have added Ember and Shadé to their family. In addition, they’ve adopted Easton, who was an only child when he came to them and currently are working on a kinship adoption of the baby brother of their sibling set of five. “We always think we have enough kids, but we remember that there are still kids out there who need a great family to be a part of,” says Haylee.

Over the years, the Hoffman’s have learned a lot about fostering and adoption. For Corey, showing kids what the consistent presence of a father is like has been a learning experience in itself. He says, “Many kids don’t know what it’s like to have a father figure in the house so sometimes it’s more challenging for dads to make a connection.” He encourages other prospective foster parents to provide that consistent connection with a father when they can. The Hoffman’s know the challenges that come with fostering and adoption. They’ve had biological parents who wanted to work with them and some who did not. Some kids they thought would stay forever still ended up going home. Some kids needed more love and attention to thrive. Through it all though, Corey and Haylee would tell prospective adoptive parents, “Go in open-minded, set realistic expectations. It is SO hard and you will have trials, but helping kids who need a stable and loving home is the most rewarding thing.”