Our Little Boy Was Worth the Wait 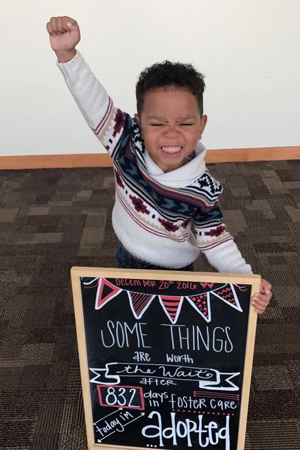 Every adoption story is special. Sometimes it’s the result of a new relationship and bond forming; sometimes it’s family members taking in a relative in need.

In Tara Montgomery’s adoption story, an adorable 18-month-old boy came into her family’s life through a foster care placement and changed everything.

You may remember seeing a photo of the boy, raising his fist victoriously by a decorated sign that read, “Some things are worth the wait, after 832 days in foster care, today I’m adopted”. The photo was posted to Twitter on that special adoption day and proceeded to go viral.

Below is Tara’s story, originally published in The Washington Post.

My name is Tara Montgomery. I’m a single mother and an administrative secretary at a high school in Arizona — and, on Dec. 20, 2016, I officially adopted my 3-year-old son, Michael. My first adopted child.

My daughter, who wanted to savor the moment, snapped a photograph of Michael, one victorious fist raised in the air, another hand holding a chalkboard with a few words written in marker: “Some things are worth the wait,” the sign read. “After 832 days in foster care, today I’m adopted.”

She posted the photograph on Twitter. More than 143,000 likes and 57,000 retweets later, my new son’s adoption — and the joy on his face at finally joining his forever family — went viral.

Michael first entered our lives as a foster child on Feb. 14, 2015. My decision to become a foster mother wasn’t easy (or quick). I never expected to become one. My daughters’ dad passed away in 2001, and I was a single mother raising three young daughters in a tumultuous economy.

But a few colleagues approached me: Are you willing to use your experience and speak with teenagers who have lost a parent? I said yes. I talked to them. I counseled them. As time went on, though, I began noticing more and more students who didn’t have anyone. My heart felt for these children and their circumstances. It’s not their fault — and it’s sad to see anyone in a situation where they’re moving through life without guidance from someone who loves them.

One day, after being approached by another colleague at the school where I work, my daughters and I made the choice. We were going to do what we could with what we had to make a difference to children who had nothing. I became a foster mother — and my daughters became foster sisters.

We welcomed three children into our family, one at a time, acknowledging that each welcome would be temporary: a short-term relief for these kiddos whose immediate futures were unclear.

In early 2015, I received a phone call from the Arizona Department of Child Safety, which handles foster care in our state. “We need to move a little boy to a new home,” said the voice on the other end of the line. “Are you interested?”

Yes. We personally picked him up from the parking lot of a mall. Our fourth foster child, and his third foster home.

That Valentine’s Day in 2015, Michael joined our family in what we all assumed would be a temporary living situation in this 18-month-old boy’s transition to a more permanent home.

And that’s when everything changed.

Part of our family, right from the start

I wasn’t looking to adopt a new child. I have three daughters to care for — and a baby granddaughter.

All we set out to do was to make sure that kids without parents didn’t have to worry, if only for a short period of time, about what would happen to them. There were plans in motion to reunite Michael with his biological mother, and I was proud of being able to give him relief until that happened.

The next 22 months went fast.

Michael’s presence brightened our lives as much as we hoped to brighten his life through fostering. His laugh. His smile. His energy. It became a part of our home’s ecosystem. It was an instant connection.

Now, let’s be clear: Our foster experience wasn’t a cakewalk. Michael suffered from asthma attacks for which we had to take him to the doctor — more than a few times. We had to carry around his inhalers and learn how to use EpiPens. We visited doctors, emergency rooms and specialists 26 times in the first year. He was a sick little guy.

I wasn’t the first foster mother (and won’t be the last) to look into the mirror after an all-nighter with my new child and say to myself, “I don’t know what I’m getting myself into.” But, as often happens, overcoming these bumps in the road has made our family stronger.

Michael developed an incredibly special bond with my youngest daughter while dealing with these issues. Whenever he has a particularly bad asthma attack, the only person he wants to sleep next to is her. He’s comforted by her presence, and she’s comforted by being “that person” in his life. They adore each other in a way that may not have happened otherwise — at least not as quickly.

From changing his diaper, putting on his shoes, or simply pouring him a drink at dinner and snuggling with him at night, as Michael grew, my daughters grew, too.

It was clear: He belongs here

Michael loves trucks and trains. He loves running on the sand at the beach, seeing the waves come in and waving at the seals as they lie on the wet rocks. Only 3 years old, he calls the beach his “happy place.”

He revels in leaving surprise selfies on our cellphones. He often wakes in the morning to tell me, “Mom, I so happy.” He will run into the girls’ rooms and ask them, “Dae, T — Are you so happy?” (We are all so very happy.)

These are only a few of the things I’ve learned about Michael since picking him up that day in early February. These small, unique details you learn about children — they make everything worth it. He went from “a foster child” to “my foster child” in the blink of an eye.

And that’s why, when the next phone call came — informing us that the ongoing efforts to reunite Michael with his biological mother had fallen through — it didn’t take long for my daughters and me to decide.

Everything had seamlessly clicked into place from the beginning: This little boy came to us on Valentine’s Day. He came to us on Arizona’s birthday. He has the same last name as my biological daughters. He looks like them. He has our sense of humor. He made our family stronger.

And, more than that, we never wanted him to wonder again where he might end up next. So, on Dec. 20, 2016, we adopted Michael — and he became a permanent part of our family.

He woke up a few days later on Christmas morning to a tree with presents under it. He flung open the wrapping paper to find Thomas the Tank Engine trains and a new bicycle, all while being surrounded by new, permanent family members for the first time — people who loved him and cared for him and would continue to do so forever.

You can make a difference

The process may have been easier for us than for others, because Arizona has been working to make foster care and adoption an easier choice and to empower parents to welcome children in need into their families. According to the numbers, more children are leaving state care here than entering it for the first time in seven years — and more than 3,600 children in Arizona were adopted in fiscal 2016.

I can’t promise that every step of the way will be easy or that you won’t wonder whether it’s worth the upcoming speed bump in the road. What I can promise is this: Whatever you face on your route to adoption, the smile on your child’s face will be worth it.

It took me 42 years to realize what it feels like to adopt a child, this beautiful little boy, into my life.