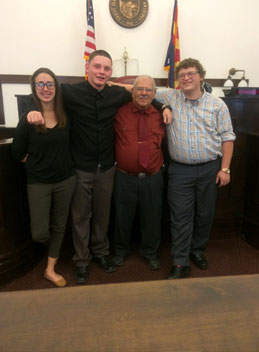 No case is hopeless. The right adoptive family is out there.

My story begins on October 20, 2014. I received a phone call from Elizabeth Wolfe, a DCS Case Manager. I was shopping at Home Depot and couldn't discuss it at that time but was able to hear the details the next day.

Elizabeth was asking me to take a case with two teen boys, ages 14 and 16 at the time.

These boys had been in DCS care since they were 6 and 8 years old. Parental rights had been severed two years ago, in 2012, so this was the second time these boys were in DCS Care.

The older boy was in a licensed foster home in Sierra Vista while the younger boy, Joseph, was in a therapeutic group home in Casa Grande. Joseph was about ready to be discharged from the group home for a standard placement. The placement that had been arranged for him was All The Kings Horses Children's Ranch in Benson. I was the one to transport him from Casa Grande to Benson. This placement only lasted one week. It took them that long to read his file and decide this was not the place for him.

The next placement was a kinship placement with a sister and her family in Sierra Vista. This placement lasted three months to the day; his behaviors just could not be dealt with.

His next placement was with his brother in the licensed foster home in Sierra Vista. Joseph disrupted from this placement in a little over three months. The situation between him and his brother became dangerous; someone was going to get seriously hurt.

His behaviors were not conducive to reaching his goal of permanency. In early 2015, Joseph was selected to be included in the DCS Children’s Heart Gallery, a website for children who are eligible for adoption.

When he left the placement with his brother, he was placed in a licensed foster home in Duncan, Arizona. Joseph loved to be in the center of town and this placement was on a farm in a very rural area of Arizona. He hated it. Whenever he talked about his placement, his comments were filled with 'F' bombs and other foul language. I was sure he would disrupt. He had been told he would only be there three weeks and we were now at that magical three-month mark.

By this time I had developed the belief that this young man was unadoptable. There was no place that he would be able to maintain a relationship with any family.

However, as time went on and school started after the summer break, this young man started to settle in. He became interested in sports and played on the school baseball, football, and basketball teams. He actually attended classes and received passing grades. He accepted being baptized into the Mormon Church.

On November 18, 2016, Joseph was adopted. It took a very special and loving family to work through his issues, and in the end, become his mother and father (or grandma and grandpa as he calls them).

If you find yourself with a very difficult case and start to feel it is hopeless to find permanency, remember, the right adoptive family is out there; we just need to find it.